HomeOur Team A show of hands at Priory Primary School

A show of hands at Priory Primary School 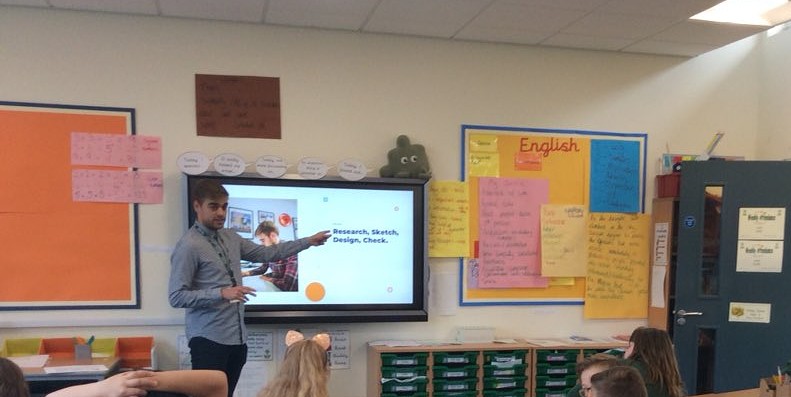 July 17, 2019 By Nicole Gallagher Comments are Off

RED’s Matt recently visited his old primary school to give a presentation on ‘what it’s like to be a graphic designer’. Matt, who attended the school until 2003, covered his education, career path and what his job entails.

Putting our thinking caps on

The school asked if Matt would speak at a recent career’s day for their current year 5/6 students. The idea of the event was to help guide and educate the students into different career paths, and to understand more about industries they might want to work towards in the future. In attendance were alumni scientists, photographers, radio presenters, physiotherapists, firefighters and police officers.

The presentations were given to three different classes, with each one including a Q&A session, and lasting 30 minutes. Matt started the presentation by outlining who RED is and what our different job roles are. He then discussed the services we offer and the different parts of the world we have visited, before discussing his personal career.

Matt covered his career path, right from leaving primary school to GCSEs, college and university. He then explained to the pupils what he does on a day-to-day basis at RED, which can include anything from designing logos, making the finishing touches to websites or storyboarding a movie concept for our clients.

A show of hands

Louise Adams, who organised the careers day added: “The children were all absorbed in Matt’s presentation and he raised their awareness of vocations they can pursue when they have art as one of their key strengths.”

“Many of them were asking more questions about being a graphic designer, with lots of them saying they would be interested in a career in the industry.”

We hope the presentation was useful for the pupils. Matt had a great time visiting his old school and enjoyed the experience of sharing what he does with the children.

We would like to say a massive thank you to Louise Adams for her support and management of such a well organised event. We’d also like to thank all the pupils and staff at Priory Primary School for welcoming us and asking some brilliant questions!